skip to main | skip to sidebar

How Soon They Forget

I love how the media is saying that the Chargers are going to be better since somebody new is coaching them. Granted if Marty doesn't make bone headed decisions in the playoffs, he's still coaching the team (actually it was that moron cornerback that fumbled the ball instead of going down that cost them that game.) But Norv Fucking Turner, give me a break. Has he done anything as a head coach that makes you feel good about the hire? The answer is, of course, never. Between the mismanaged game clock and the general cluelessness, he is a terrible head coach. Good luck Charger fans.

P.S. - I'm back baby. After the game that cannot be mentioned, it took a while for me to get me enthuasiam back.
Posted by Jim U. at 3:30 PM No comments:

In a few short hours, I will be in Miami rooting on the Bears. 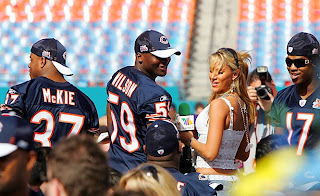 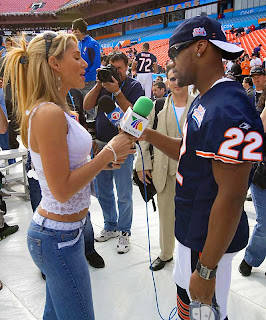 We're Going to the Super Bowl!!

Where are the Bears going?

To the Super Bowl!!

The Best Story That Should Not Have Been Told

I heard former NFL QB, Bobby Herbert say, that by rooting for the Saints, it was an act of patriotism. A true American should cheer for the Saints because of all the suffering, redemption and perseverance that these citizens have demonstrated.

Here's my issue. The amount of damage to the city of New Orleans could have been prevented. Hurricane Katrina was a powerful force, yet scientists were predicting a strike like this for years. As late as four years ago, I remember a report on NPR discussing the great risk that New Orleans was exposed to if a hurricane ever struck. The army corp of engineers recommended strengthening the levees. Scientist warned that by developing surrounding marsh lands that you will eliminate/reduce a natural buffer against the storm. Needless to say, these precautions were never acted upon. Because it was a level four storm, damage would likely occur, but the amount could have been reduced.

This thinking, and consequent acts of "patriotism" demonstrated by rooting for the Saints, is equivalent to a high school student abusing LSD for years and frying his brain, and then having his parents celebrate that he barely passed his courses and graduated high school. Feel happy for the kid, but be upset by his parents for allowing him to be in that perilous condition.

The Saints are a positive for the city, bringing entertainment and a distraction for those who survived the hurricane, but the Saints cannot rebuild it. This "Cinderella/American Comeback" story should never have been written. Let that be a lesson for New Orleans' parental guardians, Mayor Ray Nagin and Kathleen Blanco.

Labels: Saints Cinderella Story That Should Not Have Been Written

But Sunday at an unfilled Soldier Field (an embarrassing 6,659 no-shows on a surprisingly tame 32-degree January day on the lakefront), Grossman kept his screwups to a workable number.

Gene, I was at yesterday's game and there was no way that there were that many no-shows. Soldier Field's seating capacity is 61,500 so your numbers would make 10.8% of the stadium empty. It looks like Gene doesn't let the facts get in the way of a (not so) good story.
Posted by Jim U. at 4:34 PM 1 comment:

This Guy is a Douche Bag 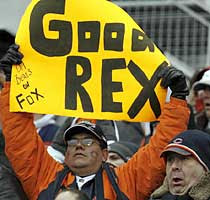 What you didn't see is the reverse of the sign that read "Bad Rex." First thing, it's the playoffs support your team. The Bears aren't the Lions and it's a little too late for Brian Griese. Second, don't assault me and take my hat. Finally, tell your bitch of wife of yours to shut up and not keep my brother in the pokie for something he didn't do.
Posted by Jim U. at 4:08 PM 2 comments:

It happened today. A moment all young sports bloggers dream about. What is the monumental thing of which I speak? My blog was mentioned today by The Big Lead. When I started this wacky little blog a few months back, I had no idea it would garner such national attention. I am flabbergasted, really I am. With this new readership, I vow to post more often. Aw crap more work for me.
Posted by Jim U. at 11:21 AM No comments:

No Mea Culpa from Peter King

Usually I don't blog about national sportswriters (or much for that matter), but when I saw this article from Peter King this morning it made me angry. In this article, he slams Nick Saban, albeit indirectly as not to sully himself in case he needs a quote or favor from Saban later. Let's take a look in the way back machine to this article less than two months ago. Let's take a quote from it:

My feeling is this: I liked Saban a lot coming into this job, and his year and a half in Miami has only very slightly dimmed his luster in my eyes. He's 12-13 in trying to revive a sinking ship. Give him time, and I think at the end of Year Three you'll see a very good NFL team. Saban's too bright a football mind to fail.

Obviously, Peter, we cannot give him three years because he bolted after only two. If you want to do the easy and obvious thing and bash Saban, go right ahead. At least admit that you were wrong about this pompous jerk in the first place. Remember Saban was Jerry Angelo's first choice to replace Dick Jauron three years ago, but the Bears got Lovie Smith instead. Sometimes the decisions that you don't make are the best ones.
Posted by Jim U. at 11:24 AM No comments:

I'm Surprised That He Didn't Crash His "Love Boat"

Minnesota Vikings cornerback Fred Smoot will miss the last game of the regular season because of a jaw that's broken in five places as a result of a recent car accident.
Posted by Jim U. at 2:00 PM No comments: 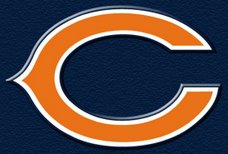